UPDATE: Due to the overwhelming influx from Google searches, it seems this may be a popular topic.  If you are interested in a finished package that will mount to your camera, e-mail me at (thisdomainname)@gmail.com.  I have already ordered the circuit boards and components and they should be arriving within the next few weeks.
---break---

My latest hobby projects have been using an Arduino microcontroller board: 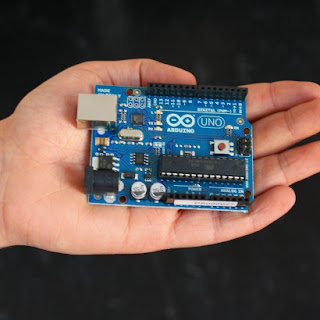 So far I have built an automatic garden watering setup using a 12VDC solenoid valve connected to my garden hose.  (I'll hopefully get the details on this posted later)  And this, an automatic camera trigger for capturing shots of lightning bolts.

An example of it working in my hotel room:
Once I get out in the field to capture actual lightning, I will come back to edit this post.

The idea came to me while I was out taking pictures in the Florida wetlands and a massive storm system started rolling in.  As I was walking back to the car - which at this point was about 1.5 miles away - I started to see a pretty amazing lightning show on the horizon.  I could not, however, make my trigger finger react in time after seeing a lightning bolt in order to capture a shot of it. After doing some quick research, I came up with this Arduino project.  Here is the rundown... Materials required:

Setup:
Wire up the LDR (photoresistor) with one leg connected to the 5V and the other to the 220 Ohm reistor and A0 (Analog Input, pin 0).  The other side of the resistor connects to ground.  The IR transmitter is connected to D13 (Digital Out, pin 13) and ground.  It acts like an LED, so the long leg (positive side) must be connected to pin 13.  A short side note: this reminds of me of a few years ago, hacking the original Xbox to put in a modchip.  I had a bright blue LED that I wanted to solder on the board for power indication, but the clearance to where I wanted to mount it was not enough, so I clipped the legs shorter.  This is when I learned that polarity in LEDs matters, and if you clip the legs, make sure you clip the ground side shorter, or in some other way mark it so you remember.  LEDs will not function if wired backwards.
Back to the setup... if you wire it as shown in this breadboard picture: 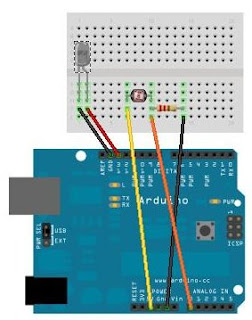 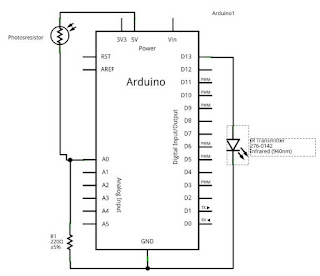 ... all you will have left is building the "sketch" - what the Arduino community calls the software / program.  I will assume you already have a working knowledge of sketches and setting up the software on your computer and will not go into those details.  If this is your first project, I highly recommend picking up the book Getting Started With Arduino by Massimo Banzi (co-founder of Arduino) from Radio Shack or any book store.  It goes well with the Arduino Uno starter kit.
A couple things to note: 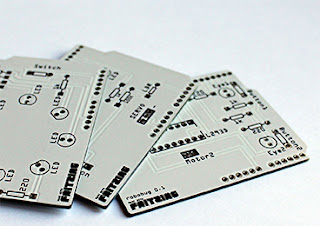